I didn’t anticipate ever writing a movie review on this blog. But I read some interesting reports about the Coen Brothers’ new movie Hail, Caesar!, and I saw it today. This post is neither a plot summary nor a critique of the skill of the cast and crew. Rather, I am going to address the exploration of Christianity in this film.

I don’t know what the Coen Brothers personal beliefs are. They were raised in the Jewish faith, but did apparently marry non-Jewish women (or at least women not Jewish by birth). They have wrestled with serious philosophical and faith issues in prior films. Others have commented that A Serious Man was a meditation on The Old Testament.  They have also grappled with nihilism (The Big Lebowski) and the mystery of iniquity (No Country for Old  Men). Their movies are very moral in the sense that those doing wrong rarely if ever “get away with it.” Intolerable Cruelty was arguably a celebration of the permanence of marriage, which is not that odd coming from two Hollywood figures who’ve stayed married to the same women. True Grit had a strong religious element.

I will be freely discussing plot elements for the rest of this post, so SPOILER warning. I will engage in fairly aggressive speculation, so feel free to completely disregard and laugh out load at some of what I suggest. When you read a lot of Gene Wolfe, you learn to look for hidden symbolism and such. The peril is you may start seeing it when it isn’t there.

In my view, there is a lot of subtle to overt Christian (in particular Catholic) symbolism in the film. Let’s start with the move poster, and compare it to the Logo for the Jubilee Year of Mercy. The Jubilee logo is a reference to Christ as the Good Shepherd, who goes out to find the lost lamb. Similarly, the poster shows a man carrying the lost actor (lamb), Baird Whitlock. Interestingly, “Whitlock” comes from “White hair”, sort of like a lamb.

I think the intent of the poster is to depict someone acting as the Good Shepherd, perhaps Eddie. While this scene never exactly appears in the film, Eddie is the one orchestrating Baird’s safe return. Perhaps just a coincidence. 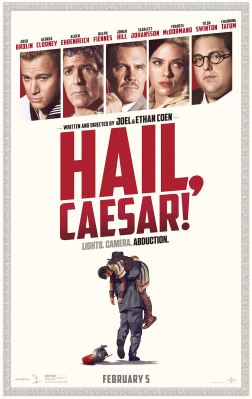 The Seven Sacraments are alluded to expressly, or indirectly:

Baptism: The old-timer jumping in the trough of water during the premiere of The Lazy Moon. In particular, its the full immersion baptism of John the Baptist. Hobie is a sort of John the Baptist figure, a rustic coming out of the wilderness to join the movie.

Communion: Baird Whitlock drinks from an elaborate chalice before passing out. At the communist HQ, they have communion in the form of the white bread sandwiches in which the crusts are cut off. The Coens make a point of showing them being prepared and then distributed. Baird holds two up. Why bother to cut the crusts off? So they look more like communion wafers.

Marriage: Ms. Moran and Mr. Silverman are married off screen. His reliability and commitment are what appeal to DeeAnn, emphasizing the sacred bond of marriage. The Mannix marriage is also shown.

Confirmation:  Bishops used to gently “slap” (really tap) young people on the face as part of the confirmation ceremony in the RC Church.  Mannix slaps people twice in the movie. Both the young actress early in the movie, and also the almost childlike Whitlock towards the end. Arguably he was trying to get both to grow up. This one may be a reach on my part.

Anointing of the Sick: No one is actually ill in the movie. Eddie does save the film editor from being strangled by her scarf. Burt places a wet cleaning rag on the bartender’s head during the dance routine. No good fit, perhaps you can spot one?

Holy Orders: The all-male writer’s group? Baird “joins” the party during his kidnapping by signing up for a communist party membership. Perhaps a reach.

As an update to this post, I think the dancing sailors bit (“They’re ain’t no dames here”) is a reference to the all male catholic priesthood. Some of the homoerotic elements may be the Coens’ commentary about this feature and some of the consequences.

Scenes from the movie and  characters that are allusions to events or people from the Gospels:

Lawrence Laurence: He is an allusion to Pontius Pilate, and the scene with Hobie was an allusion to Pilate’s questioning of Christ. This is more than just the shared alliteration. The name Lawrence comes from the Latin for Laurel leaves, which Roman leaders would wear on their head in the form of  a wreath. Pilate is sometimes depicted wearing a laurel wreath. Lawrence’s direction of Hobie is fruitless and repetitive, like Pilate’s questioning of Jesus. Jesus would not say what Pilate wanted him to say, like Hobie won’t/can’t say what Lawrence wants him to say.

Burt Gurney: He is an allusion to Judas Iscariot. He betrayed the studio by aiding the kidnapping. He took the 30 pieces of silver in the form of the $100,000 when he got on the sub. He “returned” the silver when he dropped the money in the ocean by accident. His descending into the dark ocean in the black submarine with the red light is an allusion to his death and perhaps damnation to hell.

Baird Whitlock: In part, Lazarus. He “goes to sleep” and his body is placed in a van and then a room.  He is rescued and returned to the living.  Also Peter the Disciple. He denies the Lord by joining the party and dissing the studio to Eddie’s face. He is rebuked by Eddie, like Peter is by Christ.

Hobie Doyle: John the Baptist, in part. The rural origin. The Baptism scene in The Lazy Moon. His basic goodness. He does act out the part of Christ in being questioned by Lawrence/Pilate. His rope tricks are an allusion to Christ’s miracles.

DeeAnn Moran: Mary Magdalene/The Woman Taken in Sin/The Virgin Mary. Her water scene is arguably an allusion to the attempted stoning. She takes her fin off and hurls it at the conductor, striking him. The other swimmers had formed a circle around her. She was pregnant at the time with an out of wedlock child.

Her child to the unknown father may be an allusion to the Virgin Birth. She marries a Joseph, who accepts her despite the fact that she is already pregnant. She is wearing a  spotless white dress in her one scene with Joseph Silverman, a symbol of the sinless Mary.

Eddie Mannix: The Christ, Son of Man. Christ’s temptation in the desert is alluded to in the meeting with Cudahy and his offer to join Lockheed, who has the power of the A-Bomb. Too many other references to count.

Most importantly, he puts together the ransom for Baird, the lost sheep, immediately without any hesitation. He does not try to go to the cops, or avoid paying it. Christ “ransomed” us from sin and death. This is the most important common element.

Cudahy: Satan, he tempts Eddie. He buys him meals, calling to mind the stones to bread story. He offers Eddie cigarettes too as a form of temptation.

The Communist Writers group: The Pharisees/The Sanhedrin. Their all black hats on the row boat recalls the  black religious garb of the Pharisees of the time of Jesus, at least as depicted in other movies.

Thora and Thessaly Thacker: Mary and Martha of Bethany. Both sisters, both same first two letters of first names. Thora and Thessaly are always pressing Eddie for timely responses to their stories about Baird/Lazarus. Mary and Martha similarly chastised Jesus for not returning sooner when Lazarus was ill. Both have a house-plant related last name. Thacker comes from thatch(thatch roof). Bethany means “house of figs.”

Carlotta Valdez. I think this is a Salome allusion, she is a dancing actress(Like Carmen Miranda), and does little dance for Hobie on their date. She even balances something on her head, calling to mind John’s fate. Carlotta lives in a palatial estate, consistent with Salome the daughter of King Herod.

Other references I noticed:

Capitol Studios. Capitol comes from the Capitoline Hill of ancient Rome. It was the highest hill, where the Temple to Jupiter stood. Jupiter was the chief of the Roman pantheon. I think Capitol Studios is supposed to represent the Church, as both the Body of Christ and the physical structures, here on earth.

During the crucifixion scene of Hail Caesar!, the character played by Clancy Brown makes a point of referring to Jesus several times as “a Jewish priest.”  I have rarely heard Jesus described this way. Interestingly the name Coen comes from Cohen, who are the priestly tribe of the Jewish people.

Finally, the movie within the movie Hail Caesar! is a reference to the actual movie Ben-Hur, which is subtitled “A Tale of The Christ,” just like Hail Caesar!. The scene with the water and the slaves  comes from Ben-Hur, and is the only time Jesus is directly shown in both movies (from behind).

Now the question.  If you find any of my speculation credible, why did the Coen brothers do this? Is this a parody/satire on Christianity and Catholicism. I read one review by a Catholic who thought they were making fun of religion.

I don’t think this is it. While Eddie is overly scrupulous about confession (and the priest tells him he is, and this priest is portrayed in a good light), he is otherwise giving up an easier, better paying job to take care of the various misfits and screwballs who work for the studio. He prays for guidance on the job decision.

I think Hail Caesar! is the closest the Coens can come to giving the Christian faith and Jesus a show of respect or affection in this day and age. Its a “Hey, these people may be on to something” type message. Baird’s speech before the Cross at the end should be taken seriously, even though he forgets the line and they have to cut it.  The Coens have to do this in comedy form, so no one (in Hollywood that is)  thinks they are trying to make a serious point. I don’t claim they are actually Christians or believe in Jesus. They do not appear to overtly practice any religion, from all that I have read. But if they are part of mixed marriages with Christian women, then they may be raising their children in both faiths, and have had to come to know the Christian faith as part of this experience, and treat it with some degree of respect.

So, if you already saw it, and plan to see it again, these are some things you may want to watch for.