Strangers in a Strange Land: Living the Catholic Faith in a Post-Christian World 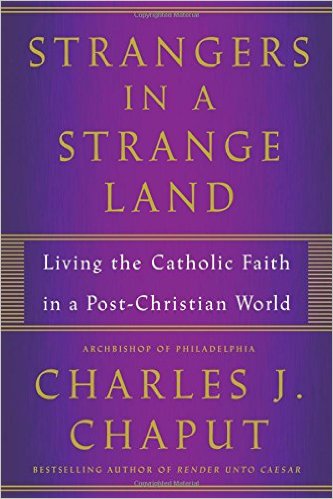 In the movie adaptation of The Two Towers, Theoden chants a portion of the above poem  as the darkness closes in. He then asks aloud: “How did it come to this?” Archbishop Chaput, in this survey of contemporary America, proposes to answer this question, among some others, including, “What Comes Next?” While he is writing primarily for a Catholic audience, I think Christians of other faiths grappling with the current problems may find it very helpful.

And she bare him a son, and he called his name Gershom: for he said, I have been a stranger in a strange land.

It is thought that this was a reference to Moses time in Egypt, a “strange land” for a Hebrew. Moses later leads the Hebrews out of Egypt after he accepts a mission from God. America is arguably the “strange land” now, where man has taken the place of God, and we build large monuments to ourselves.

Archbishop Chaput may be the closest thing to a “public intellectual” among the American Catholic Church’s leadership.  After reading the book, I can tell he is extremely well read, and conversant with the ideas and arguments of artists, scholars and activists from all corners: Alexis De Tocqueville, Saul Alinsky, Charles Peguy, C.S. Lewis, etc. He is also very conversant with all the more recent big thinkers in Catholic theology, as would be expected (De Lubac, Balthasar, etc.).

I am often interested in writers’ last names, specifically their origin. Chaput is a French name, and apparently means the “wearer of a distinctive cloak or hat”, and is derived from the French word for “chapel.” Certainly an appropriate last name for  a Catholic Bishop.  He should probably be made a Cardinal, but he is a little too forthright for that to happen anytime soon.

Chaput’s purpose is try to and help Catholics and other Christians (its not just for Catholics) understand how we got to this point. He argues that the roots go far back beyond the upheavals of the last fifty years. Essentially, he agrees with De Tocqueville’s observation that democracy is only as good as the people who live there.  Our ancestors, regardless of their party, accepted that they were sinners, were accountable to God for their actions, and accordingly went about governing this country with greater humility, caution and tolerance for those who disagreed with them.

That has changed. While the vast majority of people still believe in a higher power, more people than at any other time have substituted the worldly project of utopia for faith in God. When you don’t put God first, you make a God of other things.  Thus political candidates, parties and public policies have substituted for Jesus, Church and the Sacraments. God is a means to the worldly end, and not the End. The great joke about building utopias is that the word means “nowhere”, as St. Thomas More invented it in his semi-satirical exercise in imagining a perfect world.

I am not going to do a chapter by chapter summary. The first chapter is a particularly strong overview of the current situation. The next several get into “How did it come to this?”

The later part of the book is focused on “what to do”, and “what comes next?”.  Chaput may not agree with the ideas laid out in books like “Resident Aliens” (a chapter title), and is probably not a fan of what is known as the “Benedict Option”, referring to the monastic community of St. Benedict.   In those ideas, Christians sort of withdraw from the world and public sphere and focus on living prayerful, purpose filled lives. Sort of like islands in the storm of barbarism.Rather, I think Archbishop Chaput would prefer us to remain engaged, part of the world, even if we don’t expect solutions from the political process. He gives examples and encourages us to stand fast.

So, what does come next?  A lot of heavyweight Catholic philosophers and theologians have wrestled with a theology of history over the past century or so: Romano Guardini (The End of the Modern World), Josef Pieper (The End of Time), and Hans Urs Von Balthasar (A Theological Anthropology), for example. Pope Francis in particular seems to like Guardini, and is particularly fond of the novel Lord of the World, a fictional exercise in imagining the next phase. 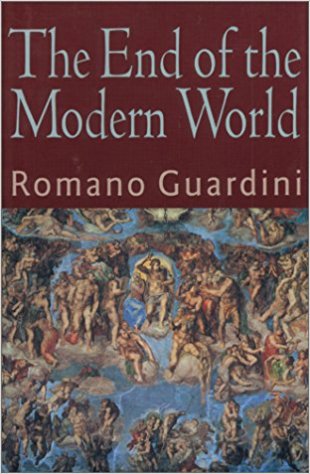 Guardini, writing after WW2, argued that the great Modern project had failed, and that something new must take its place. Guardini hoped that a new man, fully converted, would be able to:

… see through the illusions which reign in the midst of scientific and technological development: the deception behind the ‘liberal’s’ idolatry of culture, behind the totalitarian’s utopia, the tragecist’s pessimism; behind modern mythicism and the hermaphrodite world of psychoanalysis. He would see and know for himself [that] Reality is simply not like that!”

I don’t think that’s happened. Rather, the world seems to have tired of postmodernism’s irony, and are interested in rebooting Modernism 2.0. Thus the great interest in Artificial Intelligence, Robotics, Genetic Engineering, Virtual Reality, Life Extension, etc. Modernism failed because Man was not Modern, but now he can be remade through a trans-human ideology and technology. This helps explain in part why the transgender issue is so hot right now. Its just part of Modernism 2.0. Elon Musk seems a particularly prominent spokesman for Modernism 2.0, watch him to see how the new narrative continues to develop.

So, what we are left with is just plain old witness, and the readiness to stake everything on God. But as Chaput notes at several points, its not enough to ignore the world, or hope for a separate peace. You will not be allowed to disengage and retire to a monastic community.  You may not be interested in Modernism 2.0, but its interested in you. It wants your affirmation and approval, not acceptance. It will keep pushing on all fronts: public  education, workplace rules, health care, public expression, the role of parents over their children’s upbringing, etc. Chaput encourages us to continue our witness in the public square, and all that we do, even if we do not put our faith in political processes.

I will cite someone even more blunt than the good Archbishop. Writing on the same issues in the last chapter of his The Moment of Christian Witness, Hans Urs von Balthasar scripted an imaginary conversation between a commissar and an anonymous Christian under interrogation. The title of this chapter was Cordula, the name of a young girl allegedly martyred by the Huns. The catch is Cordula initially tried to hide, but after everyone else was killed, came out and gave her final witness and received the crown of martyrdom. Balthasar writes that in the end, all we have to offer is our defenseless exposure to the world, like Christ.

Hopefully it will not come to that.  And as Chaput writes, we must be hopeful, but not optimistic. Chaput likes the poet Peguy, and cites to his long poem on the second theological virtue. Hope is something we receive through God’s grace, optimism is a belief in Man and his sand castles.   I would bet on grace, not man.